Green plants are capable of performing photosynthesis. In the ecosystem, plants play the role of producers, and are often a source of food for animals. However, plants are not always the ones being eaten. Carnivorous plants are a special type of flora. Most of them grow in barren, acidic soils, especially wetlands. As nitrogen and other nutrients that plants need are usually washed away from the wetland soils, carnivorous plants have evolved the ability to capture and digest animals to supplement their nutritional intake. These carnivorous plants that trap animals to survive are reminiscent of the mystical plants that only appear in mythology. They are unique and can have tremendous value for scientific research.

There are more than 800 species of carnivorous plants in the world. Like other plants, carnivorous plants also carry out photosynthesis to produce necessary nutrients. They trap animals to gain additional nutrients such as nitrogen and phosphorus. A real carnivorous plant must be able to attract, trap, and digest animals. Carnivorous plants use their modified leaves to capture animals and produce digestive fluid to break down the animals to obtain the organic nutrients that they need. They attract insects and other small animals using smell, colors, and sweet nectar. There are several ways to trap animals/insects, including: pitfall traps (e.g. yellow pitcher plant, Sarracenia flava); snap traps (e.g. Venus flytrap, Dionaea muscipula), flypaper traps (e.g. roundleaf sundew, Drosera rotundifolia), and bladder traps (e.g. bladderwort, Utricularia). 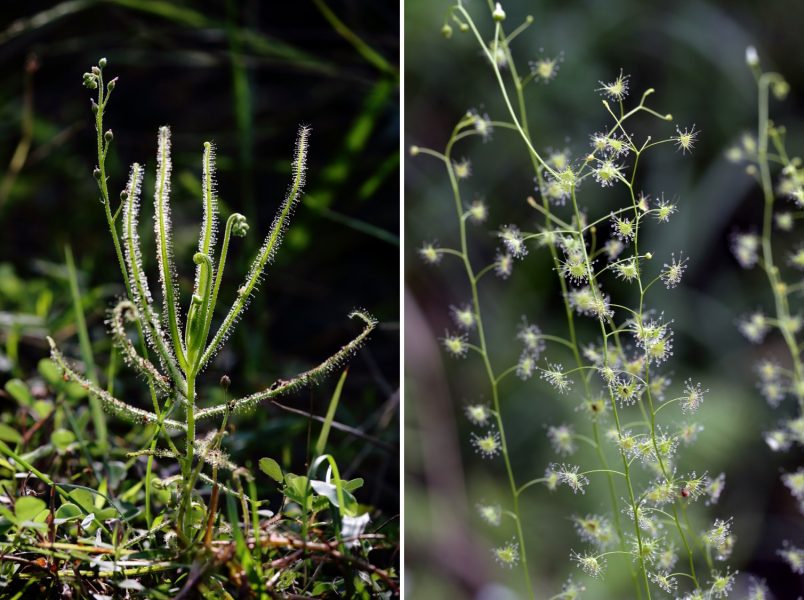 The carnivorous plants’ habitat in the Lotus Temple Wetland

The Jhubei Lienhwa (Lotus) Temple wetland was so named because it is located next to the Lienhwa Temple. The wetland is located on the north side of the temple, in the Fengbiwei mountain range on the intersection between Zhubei City and Xinfeng Township. The wetland belongs to the military and is surrounded by barbed wire. Visitors must have permission granted by the military before entering the wetland. The Lienhwa Temple wetland covers the Yangliao wetland and its surrounding regions, where carnivorous plants grow. It has an area of about 1.2 hectares, stretching across the marsh zone in the sunken ground and the sand sedimentation area beneath the parking lot. The wetland has been temporarily designated as an important wetland by the Construction and Planning Agency. The environment of the wetland is barren due to its geological features, which mainly consist of sandstone, mudstone, shale as well as unconsolidated red soil, gravel, sand, and clay. Moreover, the wetland has abundant underground water due to the Fengqi mountain range. As a result, the surface of the wetland frequently sinks and collapses. The sunken ground creates puddles that nourish many rare wetland plants.

The Lienhwa Temple wetland is the habitat of most native Taiwanese carnivorous plants, including Indian sundew (D. indica), spathulate sundew (D. spathulata), Burmese sundew (D. burmannii), and blue bladderwort (Utricularia caerulea). It is also the habitat of rare wetland plants such as Xyris pauciflora, Xyris formosana hayata, and Eriocaulaceae. This wetland has an abundance of biota, so it very valuable for ecological conservation. It is the best spot to observe diverse carnivorous plants. The wetland used to be covered by carnivorous plants, creating a unique ecological landscape. However, the original landscape in the wetland has gradually disappeared due to land development around the neighboring areas, the reduction of water flows in upstream regions, man-made constructions, and invasive plants that flourish due to the accumulation of nutrients. The original environment in the wetland underwent a drastic change when various terrestrial plants grew here, because the soils are rich in nutrients. Such drastic changes threaten carnivorous plants and make it very difficult for them to survive in the wetlands.

The Hsinchu Branch of the Society of Wilderness (SOW) has partnered with Hsinchu County Government since 1998 to come up with plans to restore the environment for carnivorous plants and wetland plants. Volunteers carry out regular works, including grass-trimming, removal of foreign plants, and pit-digging. Trails were also constructed to prevent these endangered plants from being trampled. In addition to the protection of the species and quantities of carnivorous plants, restoration of the wetland has been actively carried out to return the original habitat for carnivorous plants.

▍ Volunteers from Lotus Temple trimmed grass in the sun.

Restoration through planting and research on physiological medicine

The SOW has been working with the Forestry Bureau, the Endemic Species Research Institute, and the Dr. Cecilia Koo Botanic Conservation Center for off-site conservation in order to learn more about carnivorous plants, carry out restoration through planting, and conduct research on the plants’ medical applications. The SOW also partnered with National Taiwan University, Tsing Hua University, and Chung Hsing University for academic research on the physiological and ecological needs of carnivorous plants in order to gain knowledge of their physiological characteristics. The results of the research were very rewarding. Apart from the habitat restoration, the SOW also engages in establishing nature classrooms and exhibition areas for carnivorous plants. The goal for the SOW is to carry out sustainable management by promoting carnivorous plants as being part of the environmental education under the three pillars of Conservation, Restoration, and Education.

Written by the Society of Wilderness Jing-Chen Shen