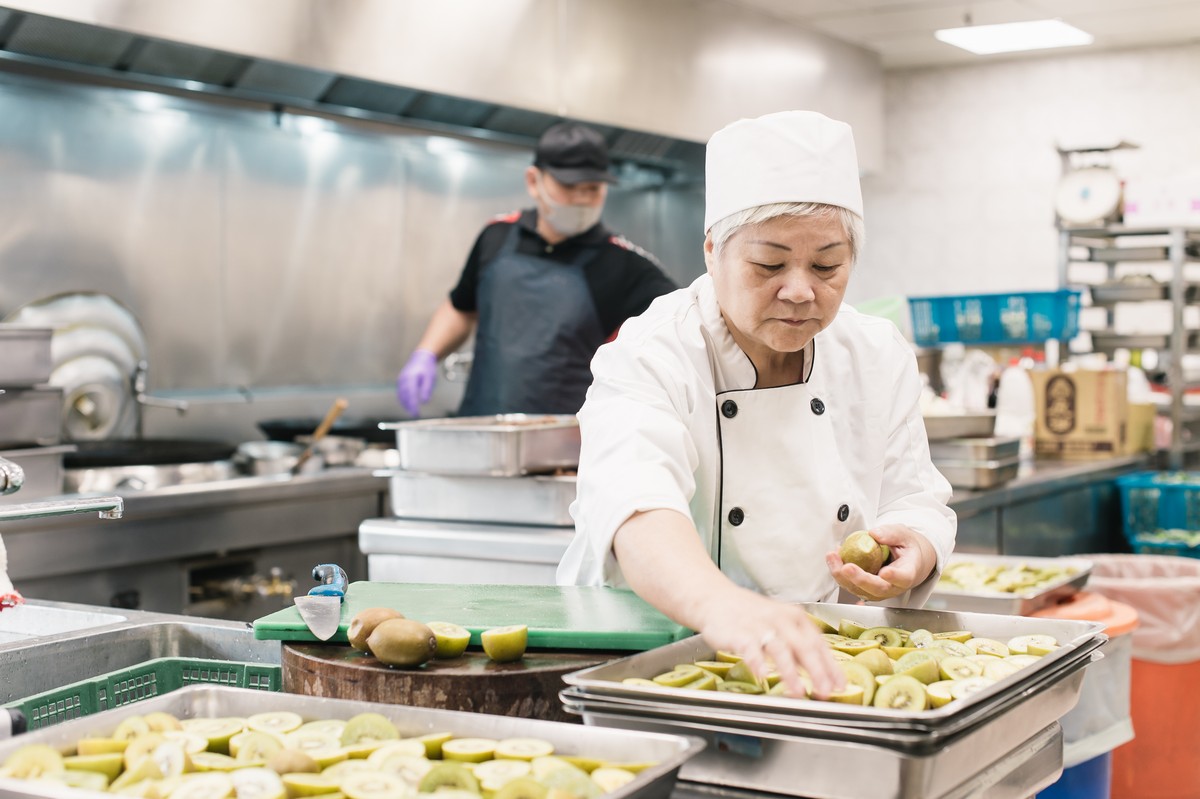 The opening of the Hermes-Epitek cafeteria in 1989.

The First Generation Chef of Hermes-Epitek, Mama Yang, began her duty almost 30 years ago within a small kitchen on Guangfu Road, Hsinchu, using a few simple pots and pans to cook home-style meals for a few dozen people. This allowed employees working out of the office to come back for lunch, take a quick break and chat with colleagues. As the company grew bigger, cafeterias in each district have opened up one after another, and nowadays serve almost 2,000 daily diners. For members of the Hermes-Epitek team of chefs, the greatest reward is seeing their colleagues enjoy healthy, stomach-comforting and heart-warming dishes.

On November 1, 2018, the company appointed me to personally visit Mama Yang for an interview that was to be published on the Company’s website. The purpose was to allow employees to better understand the reasons behind the establishment of the Company’s cafeteria. As I stepped through the door on that cold, frigid day, Mama Yang handed me a freshly-brewed cup of tea and asked if my asthma had been under control lately. This casual caring question felt warmer than the tea itself.

As steam rose from the tea, my memory returned to 1989, the year Mama Yang turned forty.

Mama Yang was originally a cook at Minfu Elementary School. She applied for the position of cleaner and cook at our Company thanks to the recommendation of her friends. Back then, Hermes-Epitek was located on Guangfu Road in Zhuzhong, Hsinchu, and composed of only eight employees that worked in a secluded red-brick house within an area full of offices. During the interview, the recruiter explained carefully that as there were not many employees, they hoped that Mama Yang could cook home-style meals so that employees could eat and chat together like family. Mama Yang replied that she would really enjoy working within a homey atmosphere. After joining Hermes-Epitek, Mama Yang has been filling the office with the smell of delicious food ever since.

In the beginning, the staff kitchen was only equipped with a household two-burner stove. Mama Yang simply bought some pans and tableware and in this way, the first Company kitchen was officially opened. Mama Yang left home at six every morning. She would ride her new little 50cc Suzuki scooter that she bought for work and go to the traditional market to buy fresh ingredients, bring them to the office, and then start to clean and cook. When it was close to noon, she would place four dishes and one soup on the round table so that when her colleagues came back from the customers’ factories, they could immediately sit down and tuck in. At that time, most employees were usually working outside the office, and what they looked forward to the most every day was coming back to the company and eating the freshly-cooked lunch. During lunchtime, the conversation was usually centered on how to help clients solve their problems. Sometimes, if an employee returned to the company late, Mama Yang would quickly make some fried rice and hot soup. Once the colleague has finished eating, he would always say thank you, contributing to the sense of warmth and appreciation that filled each other with energy to continue with their work.

As the interview continued and as noon approached, my stomach began to growl. Mama Yang went into the kitchen and quickly made a plate of lamb fried noodles. As steam rose from the noodles, my vision became foggy; I wasn’t sure if it was because my eyes or my glasses were foggy. After I devoured the noodles, we began reminiscing the era in which Hermes-Epitek was still located at Minquan Road. Once the company grew to over a hundred employees, the office was moved from Hsinchu Zhuzhong to Minquan Road, where the cafeteria was upgraded from one round table to dozens of squared tables. At that time, employees from Hermes-Epitek Taipei and the head of the company, Archie, continued to live in Hsinchu. Eating together and working hard together, it felt like the company had grown from a small family into an entire clan.

The Company’s kitchen staff look after employees like a mother looks after her family. Although the number of employees continued to grow and the volume of work increased, Mama Yang never complained about being tired. She was always happy because she felt like she was cooking for her children, so it didn’t feel like hard work at all. Supervisors would often ask kitchen staff if they needed anything, instead of always making requests. These caring actions have left an unforgettable impression on Mama Yang. As the company grew, Mama Yang knew she also needed to hone her skills. She would regularly cut out recipes from the newspaper and watch Chef Fu Pei-mei’s cooking show on TV. When she went on company-organized tours overseas to Europe or Thailand, she would, following her return, cook the dishes she tasted abroad for employees to enjoy.

At this point, the sound of dishes being cleared away reminded me to check the time, and it turned out that it was almost 1pm. Unbelievably, almost three hours had passed. I didn’t want to interrupt Mama Yang’s afternoon break, so I ended the interview by letting her know that Supervisor M had invited her to go back to the company to be the chef for a day and share a meal with her old colleagues. Mama Yang was very touched to hear this and agreed happily to this opportunity to go back to the place she loved and had been thinking about. She said that the Hermes-Epitek cafeteria was like her second home, but she was a little hesitant to go back because of the emotions that might resurface. When we said goodbye, Mama Yang said that the weather had been affected by Typhoon Yutu’s wind currents and that we were close to the Hsinchu seashore. She reminded me to drive back carefully. On my way back, I received a phone call reminder from Supervisor R, who has been with the company for 30 years, saying that it was Mama Yang’s birthday that day, and that I must not forget to wish her happy birthday. Happy 69th birthday Mama Yang!

On my trip back, I thought about how to organize the content of the interview. The gale outside of the car took me back to my memories of the millennium, and I remembered the first time I met Mama Yang was in 2000. Back then, petite Mama Yang still had a head full of black hair and her kind face always had a smile that was unmarked by the hardships of life. Seeing her again today, her smile was the same, but her hair was now gray. Time leaves behind a different story for everybody.

Over the years, the Hermes-Epitek cafeteria has changed the weight of employees. Every now and then you would hear a colleague say that they had gained 3 or 5 kg after joining the company. Getting plump is the best proof that Hermes-Epitek is a company full of happiness. One can truly feel that the Hermes-Epitek cafeteria not only provides a nourishing meal to employees, but also contributes to the feeling of homelike comfort. When dining together, colleagues chat with each other and give each other encouragement; together they not only share hard work they have done, the work difficulties overcome and the client problems resolved, but also the joys and successes of life.